So says River Song from Doctor Who!

Now that the spoiler warning is out of the way, let me start off by saying that I met George Romero, Doug Bradley, and Howard Sherman at Rock and Shock (a Horror Film convention that happens every year in New England). I’ll post pics of my meeting at the end of the review. Now then, this episode was more intense than last years super bowl. I’m not normally a sports fan, but the air of this episode was so thick you could cut it with a knife, much like a big sports game where everything is on the line. I will say the pace of this episode was much smoother than last week’s episode with how they did the switching between flashbacks. There were some great and not so great things about this episode.

I enjoyed how the first 10 minutes of the episode were completely peaceful and slow, but then things went from zero to shit hitting the fan in five seconds when The Wolves started attacking Alexandria. They had everything figured out when they scouted the place out and helped the writers by killing off all of the extra minor characters (just kidding, those characters were killed to move the story along). Such gore, much Wolves killing, wow. I loved seeing Morgan and Carol turn the tide on the assault of Alexandria against The Wolves, as well as the bit of Tension that occurs between Carol and Morgan where Morgan told Carol to not kill their attackers. Carol has once again proven to be a badass by disguising herself as one of the Wolves and taking them out almost single handed. I’m glad they answered the question about where that truck horn was coming from too, who’d have thought it was a zombie in the truck?! Lastly, I think it’s amusing how the writers are treating father Gabriel now with how awkward he’s been acting towards the other members in Rick’s group.

What I didn’t enjoy:

Where on Earth was Rick and the rest of the group this episode?! I get that it was meant to be a “this is what happened here” type of episode, but I’m bummed out that I have to wait for next week too see what happens with that massive heard of Walkers. Also, I know that Morgan acted in self defense against the guy with the black hair (the guy from the end of season 5), but it did feel a little cheap given that he was telling Carol to not kill the other members of The Wolves 30 minutes prior. Beyond that, I have no other real complaints given that this episode was pretty damn perfect by my expectations.

I look forward to next week’s episode and how the group will deal with the heard of Walkers coming towards Alexandria.

Now here are the pictures mentioned from earlier (with my Merle Dixon cosplay): 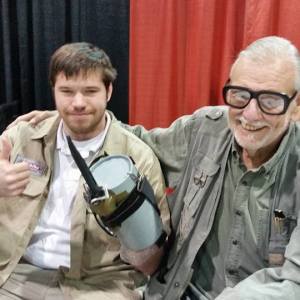 Today’s song is called “Gift of Pain” by Metal Allegiance, which is exactly what the Wolves attacking Alexandria gave to it’s unsuspecting residents.